Moorfield’s Eye Hospital has launched a campaign to increase awareness around safe contact lens wear. The Healthy Habits, Healthy Eyes campaign is aimed at students heading off to university – one of the highest risk groups – and has been timed to coincide with fresher’s week.

The awareness drive comes in response to an increase in serious external eye infections seen in centres throughout the country, chiefly an increase in the prevalence of Acanthamoeba keratitis (AK).

Infections caused by bacteria, and the less common instances of fungi and amoeba, can be potentially sight threatening. Yet while the messages around proper contact lens hygiene are being passed on by optometrists and contact lens practitioners, many younger wearers may still be unaware of the risks such infections can have on their vision. The Moorfields campaign aims to promote good contact lens practice and reduce bad behaviours which are known risk factors for microbial keratitis, such as sleeping in contact lenses overnight or washing the lenses in tap water. 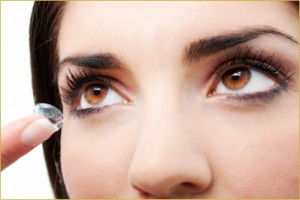 Professor John Dart, a specialist in corneal infection at Moorfields, said: “The majority of contact lens wearers we see report receiving advice from practitioners. Some follow all the steps of good lens wear hygiene and habits, yet some still end up with infections and others are unaware that sleeping in their contacts or wearing them in the shower or when swimming can put them at risk of infection.”
To spread the message, Moorfields has partnered with the Centre for Disease Control (CDC) in the US to produce a range of materials including posters for students, as well as those for use in optometric practice to reinforce the messages to patients. The campaign is also taking to social media, using the hashtag #naughtycornea on Twitter.
As part of the package, Moorfields commissioned a series of four caricature videos on ‘the worst offenders’ of bad habits for contact lens wear, and a case study of a student whose vision has been damaged by AK.

Centres throughout the UK and in the US have seen a spike in cases of AK since 2011, the rate of cases seen in previous outbreaks in the 1980s, 1990s. Commenting on the recent increase in prevalence of cases at Moorfields alone, Professor Dart said: “We’ve seen 80 cases in the last 16 months, which equates to 60 a year – more than we saw in the outbreak in the 80’s.”
Dr Nicole Carnt, a post-doctoral research optometrist at Moorfields and another key figure behind the campaign, commented: “Through talking to some of the patients we found that not all of them were non-compliant, some of them just didn’t know about the risk of water with Acanthamoeba.” Dr Carnt added: “They were very motivated to get the message out to people that if [the patients] knew that this could happen to them they wouldn’t have taken the same sort of risks.”
Professor Dart added: “We can eliminate these risks largely by better education, particularly for Acanthamoeba,”
Read here for more information about how to use contact lenses safely and about our iContacts plan which will help ensure you receive the best advice and care for your eyes and contact lenses.
https://www.hammondopticians.co.uk/wp-content/uploads/2015/09/hammond-opticians-enfield.png 0 0 HammondOptician https://www.hammondopticians.co.uk/wp-content/uploads/2015/09/hammond-opticians-enfield.png HammondOptician2014-09-16 07:00:122014-09-09 07:53:58Moorfields launches contact lens safety campaign
0 replies