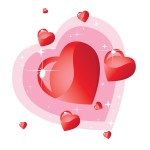 Have you ever experienced love at first sight?

What about lust at first sight?
Though these two different emotional and cognitive states are difficult to distinguish from each other, researchers studying eye patterns have found that where your date focuses their eyes on you could reveal whether he or she is romantically or sexually attracted.
Specifically, the findings reveal that eye patterns centre on a stranger’s face if the viewer regards that person as a potential romantic love partner, whereas the viewer focuses more on the other person’s body when the feeling is one of sexual desire. Though this may seem like an obvious progression, researchers say that automatic judgment can happen as quickly as half a second, producing contrasting gaze patterns.
The research team, from the University of Chicago, have published their results in the journal Psychological Science.
Lead author Stephanie Cacioppo, director of the High-Performance Electrical NeuroImaging Laboratory at the University of Chicago, says:
"Although little is currently known about the science of love at first sight or how people fall in love, these patterns of response provide the first clues regarding how automatic attentional processes, such as eye gaze, may differentiate feelings of love from feelings of desire toward strangers."
Previous research has shown that love and sexual desire activate different networks of brain regions and that these results were the same for both male and female participants.
https://www.hammondopticians.co.uk/wp-content/uploads/2015/09/hammond-opticians-enfield.png 0 0 HammondOptician https://www.hammondopticians.co.uk/wp-content/uploads/2015/09/hammond-opticians-enfield.png HammondOptician2014-10-07 07:39:002014-09-08 13:43:06Researchers detect love and lust through eye movements
0 replies